Places To Travel Without A Passport: The Complete Checklist

Vacations are super fun, and we all enjoy them. Everyone loves the idea of traveling to foreign soil to spend their long-awaited vacation. In planning an international trip, the very thought that pops out in our head is whether there are places you can travel without a passport? And if there are “What are the best places to travel without a passport?”. It’s a joyous feeling to discover new places, click pictures, and enjoy a serene sunset at a beach.

Often, the bucket of our wishes remains unfulfilled by the hassle one has to go through while applying for a visa. But, did you know that few places don’t require you to carry your passport along with you? We have found places listed below for you to plan your holiday season without having a passport. Now, you don’t have to worry about where I can go without a passport? Or what are some us tropical islands where you can spend no passport vacations?

10 Fabulous Places Where You Can Travel Without A Passport 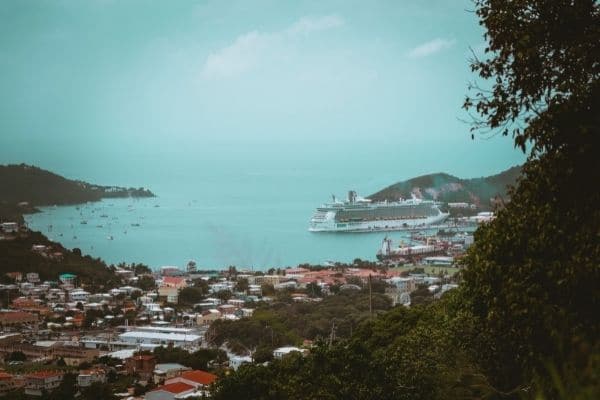 The first destination we would recommend you to start your journey is the U.S. Virgin Islands. We are situated to the northeast of The Caribbean Sea, surrounded by the Greater Antilles from the east end and about 64 kilometers away from Puerto Rico. This territory consists of three large islands, namely, St. John, St. Thomas, and St. Croix. Tourism plays one of the significant contributions in sustaining the island’s economy consistently for all these years.

This island attracts visitors from all over the globe because of its present tropical climate, beautiful sceneries. The annual temperature of this territory rarely drops below 78 degrees throughout the year.

The capital of the U.S. Virgin Islands is Charlotte Amalie that is situated here. The land area of this territory is 82 km square.

St. Thomas is great for dining, shopping, and enjoying the sunset at the beaches. The famous spots include jewelry and countless boutique shops. This territory is the most picturesque among all other territories because of volcanic hills. It has two bustling cruise terminals where cruise ships stop for their duty-free shopping that is an attraction for the tourists.

Popularly known as the “Twin City.” St. Croix is the largest territory of the U.S. Virgin Islands. Mount Eagle is the highest point of this island that is 1,165 feet above sea level.

Due to its diverse and Dutch-flavored culture, it attracts tourists from all over the globe, especially during winter. It’s the favorite spot for luxury-seeking honeymooners. Multiple beaches provide a secluded experience too.

“Island of Enchantment” is situated northeast of the Caribbean Sea and located 60 kilometers to the west of the U.S. Virgin Islands. It is composed mainly of hilly terrain and mountains, with one-fourth area covered by steep slopes.

Culebra is a tiny island located on the east coast of Puerto Rico, famous for its beautiful scenic beaches during sunset. Flamenco Beach, Isla de Vieques are famous for kayaking in the waters of Mosquito Bay. The highest point in Puerto Rico, Cerro de Punta(4,390 feet), is located in the mountain range known as “La Cordillera Central”.

Puerto Rico often has to experience Atlantic hurricanes once a year because of being surrounded by The Caribbean Sea and North Atlantic oceans. This is one of the fabulous destinations to spend your vacation near nature.

Hawaii is a beautiful state located in the United States west of the Pacific Ocean, about 3200 kilometers from the mainland. This state has several groups of volcanic islands in the Pacific Ocean.

Hawaii is famous for its beautiful beaches with unusual colors. Some beaches compose white sand in their texture, but other Hawaiian shores are covered with black, red, green, and pink sand. Whether you like biking, hiking, sailing, kayaking, swimming, or just sitting and enjoying scenic sunsets, Hawaii is the one state for you. The best time to visit Hawaii is from March up till September. This is when tourists can witness decent temperatures and the lowest rainfall.

The Mariana Islands are the southern part of a larger group of islands Micronesia situated between Guam and Japan. They are divided into two territories, namely, Guam and the Northern Mariana Islands. The Mariana Islands have numerous active volcanoes. The climate is usually tropical. Gorgeous coral reefs and beaches, colorful sea life, and distinctive rocks all add to your adventure.

This island has historical stories such as the Battle of Saipan. This small island is also evident for some of the most significant land battles fought during World War II. Regardless of the incidents associated with the military past of these islands, there is still a lot to explore here. Tourism in the Mariana Islands is split among Chinese, Filipino, American, Korean, Japanese, and Taiwanese tourists.

The City Of Magic is one of the densely populated cities of Florida. Miami is a central hub for commerce, finance, arts, culture, and international trade. This city is a favorite of tourists who want to live a city life alongside a tropical place simultaneously.

Whether you want to enjoy incredible Cuban food, want to soak up the catchy art deco architecture, or can’t wait to experience the fantastic nightlife, Miami has something in store for you. Miami usually has a monsoon-type tropical climate with warm winters and sweltering summers. Interestingly, there has been no evidence of any snowfall recorded by their official weather station.

Miami Beach is an example of a brilliant blend of quiet neighborhoods, entertainment-focused areas, and soft-sand beaches.

Guam is the westernmost territory of the U.S., located on Micronesia island in the western Pacific Ocean. It is 2,600 km east of Manila and 9,300 km west of San Francisco. Hagåtña (pronounced as Agana) is the capital city of Guam. The climate of Guam is a pleasant tropical climate by the influence of northeast trade winds and equatorial ocean currents from the north. Temperature is generally between 20-30 degrees celsius.

This island consists of limestone plateaus and high volcanic hills that exceed 1000 feet at some places. Multiple peaks like Mount Lamlam(1,332 feet), in the southwest, and Mount Bolanos (1,240 feet) are popular tourist attractions.

If you want to spend your time away from crowds but near exotic beaches, you should consider Guam on your travel list.

American Samoa is one of the southernmost U.S. territories located below the equator. The group of five volcanic islands and atolls in the south pacific ocean. It lies about 3,500 km southwest of Hawaii and 2,600 km northeast of New Zealand. Much of the land area of this island remains untouched by tourism. The climate is tropical and quite humid. Pago has been receiving about 200 inches (5,000 mm) of rainfall annually.

Gorgeous volcanic peaks, coral-filled waters, incredible beaches, craggy coastlines sculpted of lava, and tropical rainforests add extra beauty to this island. Colorful coral reefs are shared here. Rainforests and tall trees cover the mountainous interiors. Wildlife includes The island’s wildlife consists of all sorts of crawling insects, lizards, rats, snakes, flying foxes (a type of bat), and pigs. One inlets is Pago Pago Harbor, which divides the island nearly in two and can be visited by tourists via Hawaii Airlines.

Key West city is located in southwestern Florida, about 6 kilometers long and 2 km wide, with 11 km2. Key West has been an epicenter of military disputes. This city has played an essential part in the Spanish-American War of 1898.

One of the earliest neighbors of Key West, Old Town, is where the guest mansions and classic bungalows are found.

The city is famous for its pastel-hued architecture, particularly the 19th-century wooden homes, and a perfect place for artists, writers, and those who prefer less conventional lifestyles. This city has been proven as an excellent option for partying travelers because of the Caribbean touch. An intriguing fact about this city is it has a large gay and lesbian population.

This tiny island is situated on the gulf coast of Manatee County, Florida. The Gulf Of Mexico surrounds it on the west. Anna Maria Island is approximately 11 km long. Sea turtles can be seen prominently at the shore from May till October. Pelicans, herons, multiple types of cranes, feral parrots, osprey, hawks, sandpipers, vultures, seagulls, crows, and bald eagles are found along with various fauna like wood storks, snowy egrets, roseate spoonbills. Bottlenose dolphins are also found in the Intracoastal Waterway and Bimini Bay.

If you’re looking to spend a little more laid-back tropical beach vacation than Miami or Key West, you should not forget to add Anna Maria Island. While you’re here, you could make the best use of time by enjoying shopping along the quaint Pine Avenue or swimming at the relaxed Manatee Beach Park.

Catalina Island is composed of two rock units: Intrusive igneous rocks and Catalina Schist. One of the fascinating things about this island is its silvery-grey beach. This is because the island is rich in quartz that gives the sand this texture.

Catalina is a haven for endemic species and several subspecies that occur naturally on the island and are found nowhere else in the world.

Over one million people travel to Santa Catalina Island every year, which contributes to their healthy economy. The reefs, scuba diving, snorkeling, glass-bottom boats tour are famous in the clear water. You can try hiking to the top of Mt. Orizaba or have a brunch in the Two resort town of Two Harbors.

I am sure this article must have helped in assessing the location for your next vacation trip. You are eligible to travel to these few places without having the passport issued or replaced immediately. There are various other options like these for U.S. citizens to travel without passports from the mainland USA.

These stunning tourist spots will ensure your vacation should be spent well and worthy in the end. Ranging from tropical hot places during winter or comparatively colder places at high altitudes to spend your summer away from heat and eye-catching volcanoes will make sure to lure your heart for months at least.